Showing posts from June, 2020
Show all

A Book Is a Web: The Craft of MONDAY'S NOT COMING, by Tiffany D. Jackson 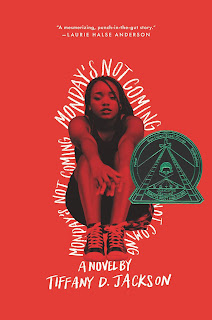 I've decided to write some essays on the craft of fiction writing, each focusing on a particular and specific skill, and each referring to a stupendous book that serves as an example of that skill. That way, I get to dive into some nitty-gritty craft topics while also recommending good books. This post contains some spoilers — though not the biggest spoilers! — for Monday's Not Coming , by Tiffany D. Jackson. *** Today I want to talk about a particular writing skill that, when done well, is often invisible to the reader who isn't looking for it. That's because it's a skill that prevents the reader from being pulled out of the book. It's a little hard to sum up in a few words, which is why I plan to write several paragraphs about it :o), but my first attempt at summing it up is this: in a masterful book, most building blocks — most aspects of character, most events, most settings, most every single thing that matters — serve multiple narrative purposes
Read more
More posts