Showing posts from May, 2017
Show all

With apologies for my recent failure to update my appearance schedule (and everything else too) -- if you're in New York and if you're at Book Expo, I'll be signing ARCs of Jane, Unlimited tomorrow from 2 to 3 at the Penguin booth. Come and get them! :)
Read more 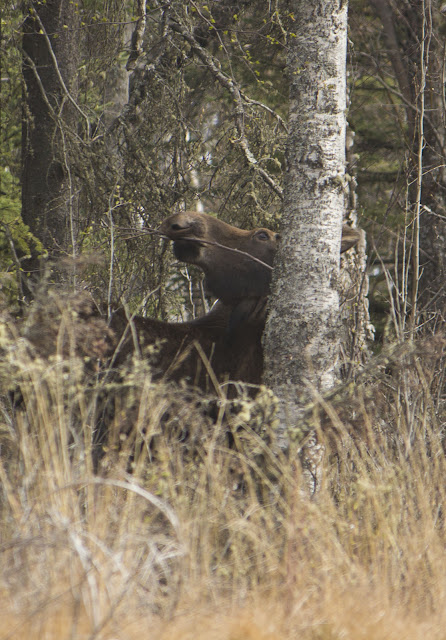 This moose removed the leaves from this birch tree so delicately. Spotted near Eagle River; picture taken by Kevin.
Read more

In Which I Do Something Extraordinary 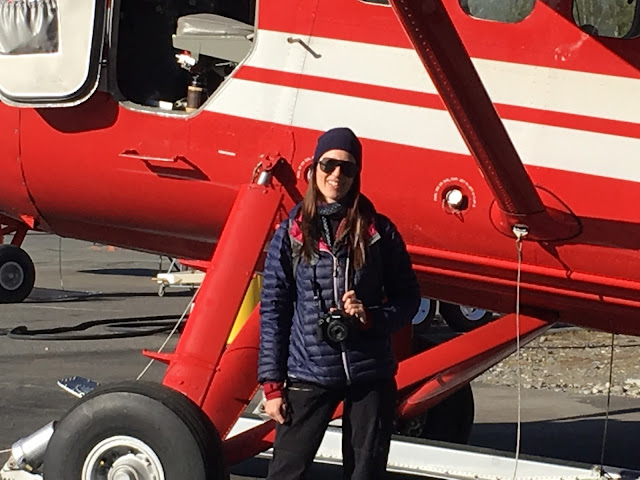 While Kevin was off hiking on his own... I treated myself to something special. I boarded a little red plane... And we flew to Denali. Click on any picture to embiggen. The peak on the left is Denali. That's a glacier flowing through the center of the picture. We flew all the way around Denali.  Glacier on left, peaks on right. We flew low over glaciers. We flew so close to the peaks! Did I mention I got to sit in the cockpit? That's Chip flying the plane. Those colorful dots are tents of climbers on their approach to Denali base camp. See the lines in the snow? Base camp is along the path to the left. The dark shape at the top is the shadow of the mountain. Follow the line to those few little dots in the left middlish part of the picture. That's Denali base camp! Then guess what we did? Some hikers needed a pickup... So we landed in the Ruth Glacier Gorge. We landed on a glacier! The pl
Read more 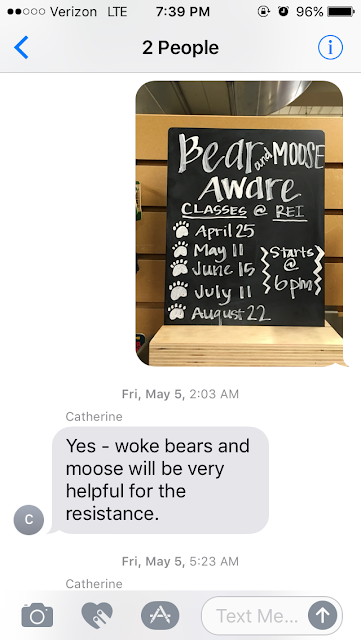 Kevin Hikes Off and I Write 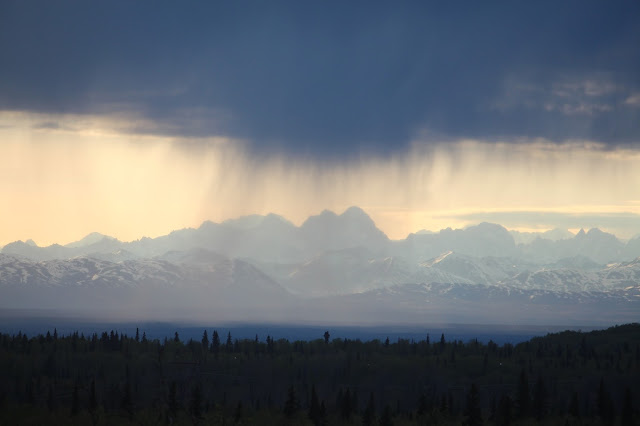 At my beautiful writing cabin in Talkeetna, Alaska, overlooking the mountains of Denali National Park, I took pictures.... It's raining in the moutains... See the face? I took this one at sunset, around 10:30pm.... While Kevin, preparing for his solo hiking trip, counted calories in chocolate, pasta, jerky, etc. to make sure he was bringing enough. It was a big job, but eventually, everything he needed -- food, water, layers, tent, stove, fuel, sleeping bag, thermarest, GoPro, snowshoes, etc., etc. -- was in the pack. Even after he fell asleep, I was still taking pictures. Took this one around midnight. That's the western sky. And the western sky again around 3AM. That little bump is the top of Denali. In the morning, the mountain was out. We drove to Denali State Park, home of Kesugi Ridge, where Kevin would be hiking. He hydrated.... Put on his gaiters.... And then he was off. There he goes! Have fun Kevin!
Read more

Hiking and Camping at Eagle River 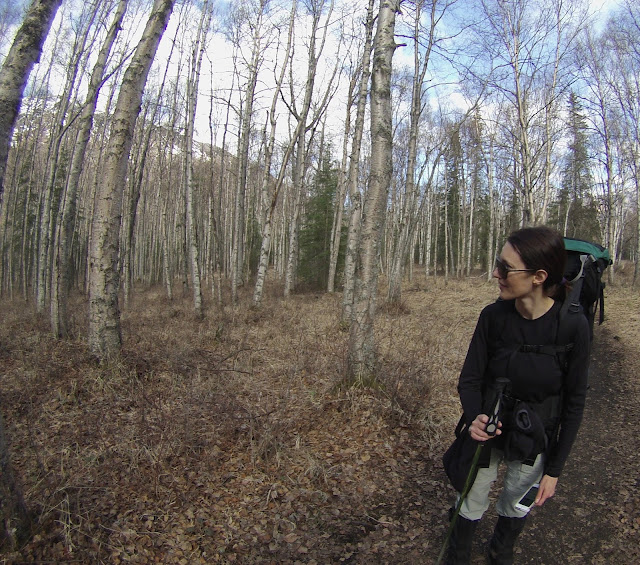 In Eagle River, Alaska, we did another overnight hike and camp. This time we made a point of practicing with the GoPro, which is a small, rugged, waterproof outdoor camera. It creates a bit of a fishbowl effect. In real life, the trees weren't really bending toward me :). This part of Alaska is full of birch trees, and birch trees are full of color! Non-bendy pics were taken with iPhones. Corn nuts. Yum. That's the river bed behind me.... pretty dry at the moment. Skull of... something or other? Pretty rocks. Birch pinks and greens! We hiked maybe 6+ miles, backtracked a bit to a nice place for camping, and made camp. Despite recent rains, Kevin was able to get a fire started, which was lovely. It wasn't anywhere near as cold as up on Carter Lake , but it wasn't warm either! Kevin got us more water from the river. (We treated it, just to be careful.) My ankle was bothering me a bit at this point, so I was sitting by the fire, be
Read more 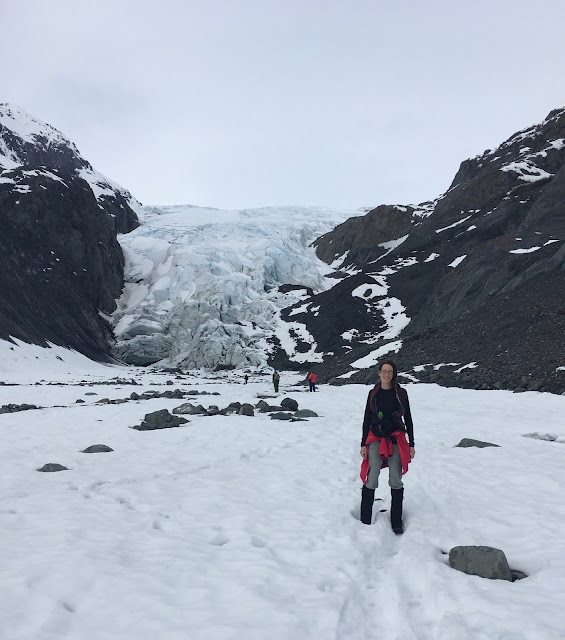 Pictures this time, with just a few words. Me at the Exit Glacier. Panorama. Click to embiggen. Later, snowshoeing at Hatcher Pass. That's Kevin. This is the view. And this is the rented snowshoe that fell apart. Sadly, we had to cut this adventure short, but I'll blog another adventure tomorrow!
Read more 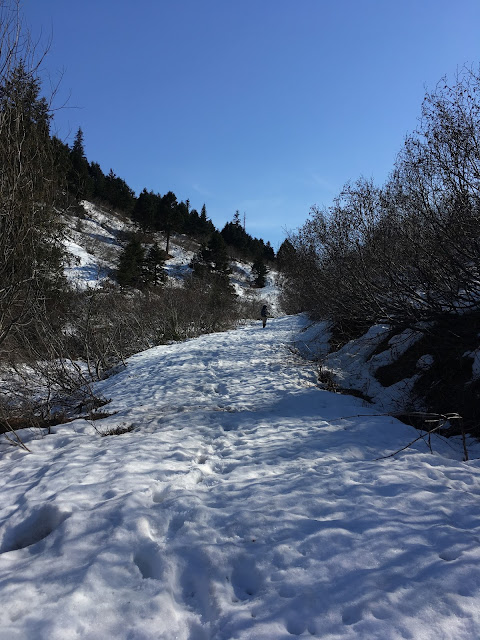 We started up a fairly steep, winding dirt path, wanting to see if it led to a beautiful and isolated spot where we might make camp for the night. After a while, we realized that given the steepness of the terrain, we should really go back down to the car and get our gear. Why do this climb twice? Shortly thereafter, with packs on our backs, we started up the path again. Our packs contained food, a tent, two sleeping bags, two Thermarests (camping mattresses), a lot of water, and warm layers, and let’s be honest, Kevin was carrying most of it. I can carry a decent pack, but I don’t have a lot of experience carrying a heavy pack up steep terrain. We had a map to our hoped-for destination, but it quickly became clear that the map showed a pretty straight representation of a path that was actually composed of steep switchbacks. Occasionally, a section of the path was covered with clumpy snow. Ah yes, we thought. We’ll be encountering occasional snow.  We reached an unexpected str
Read more
More posts