Squares and Triangles Agree: Circles Are Pointless. (Plus, a Bitterblue Update) 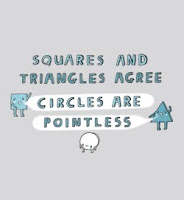 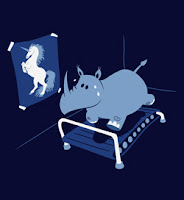 Aw, Mr. Rhino! You're breaking my heart! Don't you see how beautiful you are? You're shaped for strength and power and momentum and agility, and if you slim down to the size of that unicorn, you'll be so weak! Health at Every Size! Anyway, unicorns aren't even real! It's all a myth! Haven't you read the Newsweek exposé on airbrushing scandals and unattainable bodies? Don't let the world do this to you, Mr. Rhino! Fight the power!

So, three years ago this summer, I was finishing the first draft of Fire. Two years ago this summer, I was finishing the revisions of Fire. I surely am glad I'm not in either of those places anymore. If you were reading my blog way back then, you might remember how hard Fire was for me. Bitterblue isn't an easier book to write overall, but it's a different kind of hard. Every book is its own kind of hard. This summer, as I push toward finishing Bitterblue, I'm perfectly content to be dealing with the hard parts.

Funny things happen when the end of a first draft is in sight. The fears and anxieties shift, and some of them intensify. When you're at the beginning -- or, as I can't speak for other writers, I should say when I'm at the beginning -- there's a lot of floundering and a whole lot of WTF am I doing here!? In the middle, I tend to be focused on individual scenes, on transitions, on character development, on the micro issues, and I've become hopeful, because I've gotten over the hell of beginning, but there's still so much I haven't ruined yet by doing it. (!) But near the end, two things happen. One, the momentum picks up, like crazy. Writing a book is a lot like reading a book in this sense, meaning -- you know how you tend to read faster as you approach a book's climax? Well, I also write faster as I approach a book's climax. I cannot wait to get to the exciting stuff. So that's the one thing that happens, and that's a welcome development. The other thing that happens is less welcome: the hopelessness sets in. I can see the book as a whole now, and every single day, I struggle with the voices that are telling me it's not going to work, it's going to fail. It isn't about anything. I'm not good enough to pull all the loose ends together. I'll get to the climax and realize that it's a dumb climax. It's a mess and revisions won't solve the problems.

The good news is that they're just voices, they can't control me, and I'm used to them. Bitterblue will be my fifth completed manuscript, so I've dealt with these voices four times before. They're just a normal part of writing, and they're not going to go away, so you learn to laugh at them. They lie, but it's only because they're frightened; you learn to give them a hug and say, "You poor thing. Calm down. It really is going to be okay. You really can do this."

You acknowledge the voices, but you write anyway. This faith is performative. I believe in this book.