I'm Shipping Up to Boston (to Find My Wooden Leg)

Extra points to anyone who can identify the source of my title. Cordelia, Joe, Athanasius, and Mr. Meriwether Tigleth Bonaparte Monkey: you are not eligible for this contest. (Edit: And no googling!)
This post is a shout out to my Aunt Mary, who just arrived in northeast Thailand, where she'll be volunteering as an English teacher for the next few months before moving on to Vietnam to do the same. Here's what she wrote in her first email: "Made it to Thailand safe and sound; how could I not? I had going for me prayers to Jesus, medals of St Lucy, Jesus, and the Holy Family in my pocket, the Buddha and Sophia at my side, and a prayer cloth around my neck! No wonder I was feeling such calm during the trip."
Aunt Mary, you also had with you the undying love of one atheist in Florida. :o)
Aunt Mary is a person who inspires me. She has a way of finding her place in the world -- making her place, and finding her places -- that I admire so much that I almost pop when I think about it. She manages to stay close to family and to spend large amounts of time in faraway places. She's very good at loving people yet also knows how to follow her independent path. She isn't afraid to take risks and live with uncertainty and have adventures -- or, if she is afraid, she does it anyway.
I've been thinking about this a lot lately, because I've been trying to find my home base in the world, my place to settle and have adventures from. I'm not actually shipping up to Boston anytime soon (nor have I lost my wooden leg). But I've thought for some time -- now that health insurance in the Bay State is priced more reasonably than it used to be -- that perhaps it's time to move back. What if when I'm done writing the first draft of Book 3, or at least am closer to done, I did some exploring in the Boston area, and poked at Boston-places, and poked at me, and prodded into my internal homing device, and looked through the microscope at the question of whether maybe it's time to move back? (Erm. Just roll with that stream of metaphors, okay?)
I love some things about Florida and I LOVE being close to my sister, secret code name: Cordelia. But. I always knew Florida was temporary. And with all this new book brouhaha, I miss the children's lit community of Boston more than ever. And it'd be nice to be closer to New York, and to my publisher (part of which is even in Boston these days, now that Houghton Mifflin and Harcourt have merged). And I dislike being so far from the rest of my family (who mostly aren't in the Boston area, but they're only a drive away, as opposed to a flight -- plus, my sister Dac, who does not have a secret code name [yet], is very near Boston, indeed). I miss Boston people. Of course, that's not a valid reason, because wherever I am, I'll miss the people of where-I'm-not -- and probably also wish simultaneously that there were no people anywhere. AND I remember feeling just as urgently, when I lived in Boston, that it was time to move somewhere else. Which I did, to London, then Austin, then PA, then Florida. But. I want the atmosphere of the northeast, I want hills and forests and four seasons, I want a blue state, I want SOMETHING.... 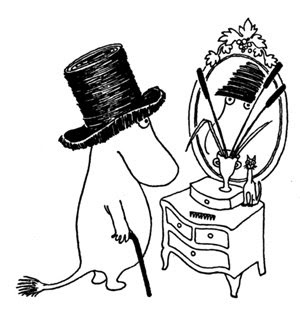 I don't know what I want.
Actually, I do know what I want. I want a cheese-egg-avocado-bagel sandwich and I want to sit down with a Moomin book by Tove Jansson and stop thinking for an hour or two. My Moomin books finally came in at the library! I may have to post about the Moomins at some point. (That's one of them wearing a hat on the left.) Maybe if and when I get a Finnish deal.... No, if and when I get a Finnish deal, I'll post about why I adore Finland, but then maybe another time, I'll post about the Moomins. (Maybe if I get a Swedish deal? Would that be an affront to Finland? Jansson was part of the Swedish-speaking minority in Finland and published the Moomins first in Swedish.) I'd never read them before yesterday, despite owning a plate decorated with Moomins and despite being told to many times, but finally, yesterday, I sat down with Comet in Moominland. It really is wonderful so far. There's a muskrat who's a philosopher who sits around thinking about how unnecessary things are. There's also a little animal named Sniff who says intelligent things like, "It's funny about paths and rivers.... You see them go by, and suddenly you feel upset and want to be somewhere else."
Sniff, baby, I hear ya'.
Cordelia Finland home Joe Moomins

Anonymous said…
I never know how long to wait before deciding a comment has been eaten by the Internet. In this case, it's been a few hours and my first attempt hasn't appeared, so I'm trying again.

Maybe the problem is that my comment is not related to the post. Anyway, I read Graceling this weekend and really enjoyed it. One of the little pleasures of reading it was in noticing how certain details were repeated. The realization that the repetitions were significant was exciting.

Not a very content-loaded comment, but sometimes you just need to say something.
August 2, 2008 at 2:35 AM