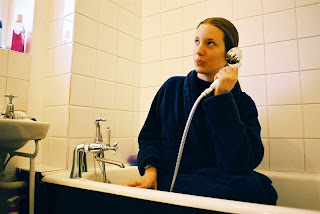 "The good writing of any age has always been the product of someone's neurosis, and we'd have a mighty dull literature if all the writers that came along were a bunch of happy chuckleheads."


Nonetheless, I am always a happy chucklehead when I take a dip in my telephone bathtub.

So, here's the short tale of me: I grew up in the countryside of northeastern Pennsylvania in a village with cows and barns and beautiful views from the top of the hill and all that good stuff. I lived in a rickety old house with my parents, three sisters, and a scattering of cats, and I READ READ READ READ READ. I read while brushing my teeth, I read while chopping parsley, the first thing I reached for when I woke up in the morning was my book; the only two places I didn't read were in the car and in bed. What did I do then? The one thing I liked even more than reading: I daydreamed.

And so, without knowing it, I was planting the seeds. Reading and daydreaming = perfect preparation for writing.

At 18 I went off to college-- thank you, Williams College, for the financial aid that made this possible-- and it almost killed me. College is hard, man, and the Berkshires are cloudy. A (phenomenal) year studying abroad in sunny Sydney revived me. After college I developed a compulsive moving problem: New York City, Boston, Cambridge, Austin, Pennsylvania, Italy, and even a short stint in London, where my showerhead hung from the cutest little stand that was exactly like the cradle of an old-fashioned telephone. The best phone calls are the pretend phone calls made from your telephone tub.

During my stint in Boston, I got an M.A. at the Center for the Study of Children's Literature at Simmons College. (Thank you, Simmons, for the scholarship that made this possible!) Grad school almost killed me, but I felt a lot more alive than when I was almost being killed in college. The Simmons program is stupendous. It got me thinking and breathing YA books. It got me writing.

Am I getting boring?

Since Simmons, I haven't stopped writing, not once. I've developed a compulsive writing problem that makes my moving problem look like a charming personality quirk. I can't stop! But it's not actually a problem, because I don't want to stop. I've been writing full-time for over fifteen years now, first doing educational writing for the K-6 market and now working exclusively on my novels. It's a dream job, which is another way of saying that when I shop for work clothes, I go straight to the pajamas section.

A decade-plus ago I grew tired of all the moving and dealt with it by, um, moving, from Jacksonville, Florida, to the greater Boston area, trading the St. Johns River for the Charles River and pelicans for geese. As a native northerner, it's nice to be back in the land of four seasons. I feel as if I've come home. :o)

And that's my story.
my bio

February 28, 2008
There's a lot of information on this page, including instructions for purchasing signed copies and how to write to me. Check out the red descriptors at the beginning of each paragraph. I am once again signing and personalizing books via my local indie, Harvard Book Store! I no longer live around the corner from the store, so I expect to sign and personalize only about every couple months or so. Please order ahead if you anticipate wanting something. Here is the link: https://shop.harvard.com/kristin-cashore-signed-copies . Notice the instructions at the top: When checking out, indicate in the comments field that you would like a signed copy. Include the name of anyone to whom you'd like the book personalized as well. Depending on the state of my chronic hand problems, I'm happy to honor requests for brief messages such as wishing someone a happy birthday, good luck with their writing, etc., but please note that if you ask me to write something long or something I&#
Read more