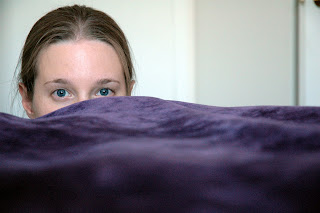 On the left, the writer hides from her writing, convinced it is out to get her.

Seriously, writing is hard, and I am occasionally crazy.

First, the nuts and bolts of my writing process: I write longhand. If you were to open to a random page in my notebook you would find so many cross-outs and arrows and signs saying "go to blue tab" or "go to 37a" that it might make you cry. (At least, that's the effect it has on me sometimes.) You might also find that I've written a note to myself at the top of the page informing myself that my writing is rot. (It's always good to keep a realistic grasp of the situation.)

Once I've written the equivalent of 30-40 typed pages, I transcribe it into a Word document using voice recognition software. I print it out and edit on paper.

I write most days and tend to decide on a day-to-day basis if today I need a break. Sometimes for 2 hours, sometimes for 12 hours; most often something rational and in-between. I don't have a daily quota. I write however much I write, and my plan is always changeable. I don't force myself to write if it's not working. I try not to check email or do other distracting things, but I don't succeed very often, and that's okay, because small rests and distractions are part of the process.

My ideas tend to start with characters in my head who are having conversations-- usually arguments. I listen to them-- they're so angry, but there's love there too, or desire, or insecurity, or despair-- and I ask myself, what are they fighting about? What happened to them? Who are they? What do they want? Why is life so hard for them?

And then it all starts to come together.

Characters, relationships, and feelings come first. Then setting, plot, and so on tend to filter in around it. The details of the plot, the bones that hold it together, are often the last things I work out; there are parts of the plot I don't know until I get to them in the book, and they happen.

Characters are similarly elusive. A conversation I'm writing may veer off course or get out of hand; I can intend a character to say something, but it doesn't mean she will. My characters often surprise me. And then I realize I was wrong about who they were, and I adjust my perceptions.

What else about my writing process?

I spend a lot of time staring into space.

I talk to myself.

I walk from the living room to the bedroom in search of something specific and by the time I get there I've forgotten what I was looking for.

When people knock on the door, I hide. When my phone rings, I yell, "Oh, who the hell is bothering me now?!" and don't answer.

When I go for walks in the neighborhood I carry a pen and post-its and can often be seen exclaiming in triumph or scowling or laughing maniacally.

Sometimes I worry that the house is going to burn down. This is why I keep my notebook in a fireproof, waterproof safe. When I go on vacation, I leave the key on top of the safe with a note for robbers asking them to please open the safe before deciding to steal it, because if they'd only open it, they'd see there's only paper inside, nothing worth stealing. Before I had a fireproof, waterproof safe, I kept my notebook in the refrigerator. I learned this from Stephen King. The other thing I learned from Stephen King is distance. Sometimes you're too close and you just have to back away from your writing for a while-- sometimes a long while. Things are a lot clearer after you've had some distance. For example, when I come back from vacation and notice that I've left a note on my safe for robbers, I am able to see clearly, thanks to that nice long time away, that I am a paranoid crazycakes.

I don't angst about my writing as much as I used to, and I've also learned to take more time away from it. I work on it just as hard as I always have, and there are a lot of things to balance: I worry about the wording, I worry about the themes, the plot as a whole, whether the characters seem to others the way they seem to me, whether the book is getting too long, whether my protagonist is likable, whether my fantasy world is consistent, whether I'll be able to hold everything together, whether there's even anything worth holding. There is never a moment when there isn't something that feels out of control. But I don't angst too much. I have learned that this is just what it feels like to write a book. You get good at ignoring the discouraging voices. Or giving them the attention that's best for them: listening to them and laughing and giving them a hug, and saying, "Yes, I know you're worried. It's okay. Let's go watch a pretty sunset."

Writing is a strange activity, but humans are weird, right? A writer is an extremely human thing to be.
writing