“You’re alleging that the two individual plaintiffs were denied the right to vote. But at bottom, you’re asking this court to invalidate more than 6.8 million votes, thereby disenfranchising every single voter in the commonwealth. Can you tell me how this result can possibly be justified?”

Hello everyone. You might expect that while we are having to endure this comical yet terrifying attempted coup, my subconscious mind would be having a field day, giving me creative dreams as usual. But here's the dream I had Tuesday night, after that disgraceful show in Michigan: A Republican demagogue, anticipating his loss in the next election and wanting to prime public opinion, begins shouting as loud as he can about how the Democrats are going to steal the election. He loses the election. Then he tries to steal the election, again by accusing the Democratic victors of stealing the election. Rank-and-file Republicans fall in around him, supporting his baseless claims. A depressingly shocking number of voters believe him.

Not a lot of creativity there, subconscious.

For me, the most stressful part of all of this is how terrifying the GOP has become. A massive web of baseless lies that are believed by a gigantic number of people is terrifying. It's what my books are about. Of course, as a fantasy writer, I've always known I'm writing about real life.

I found a recent episode of the Ezra Klein Show helpful in contextualizing the crisis that's been created by the Republican Party. In it, Ezra talks with Anne Applebaum, who studies authoritarianism. As a writer, I appreciated that the episode included a close study in character. The character of real people, of course, like Lindsey Graham and Laura Ingraham, but writers are naturally interested in the characters of real people. It's how we write believable imaginary people! Anyway, check it out if a grim perspective will help you get your feet on the ground. Don't check it out if what you need right now is comfort or reassurance, however. Those are valid needs too. And I have a couple of TV recommendations for that as well! 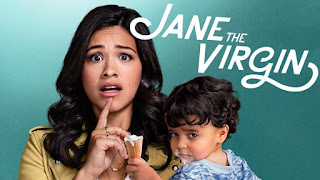 About a month ago, I finished watching Jane the Virgin, which now has a permanent place in the upper echelon of my favorite TV shows of all time. It is so funny, so sweet and full of heart. It has political relevance, in a way that will make you feel hopeful. It's about families, writing, relationships between women, parenthood, magic, and it has characters you'll love so much that when you finally finish the last episode, you'll wander around feeling bereft for a while, or at least that's what happened to me. The plot is so absurd that you don't have to worry too much about bad things happening. The voiceover narrator is an absolute delight. I love this show so much, and if you've never seen it before, now might be the time!

Also, last week I started watching Crash Landing on You, a South Korean TV drama in which a South Korean heiress has a hang-gliding mishap that drops her into the North Korean section of the DMZ. A very serious (and brooding) captain in the North Korean Special Police Force finds her and reluctantly decides to help her hide. It's very, very funny and keeps surprising me with its sweet moments — one of my favorite combinations in a TV show — and like with Jane, I'm falling for all the characters. Each episode seems to be incrementally longer than the last episode, to the point that my addiction to the show is interfering with the rest of my life, but I'm enjoying it too much to care. :o)

These are my recommendations for today… Hang in there, everyone. 💗