On Writing Jane, Unlimited: Please Don't Choose Your Own Adventure 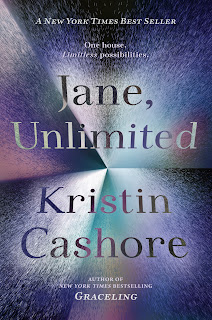 Before I start, a couple of important things:

There's a documentary airing on Monday on PBS called Unrest, about MECFS (Myalgic Encephalomyelitis/Chronic Fatigue Syndrome). I hope you'll watch it and pass the word on. Official blurb: "Jennifer Brea is working on her PhD at Harvard and about to marry the love of her life when she’s struck down by a mysterious fever that leaves her bedridden. When doctors tell her 'it’s all in her head,' she turns her camera on herself to document her devastating symptoms. Searching for answers, Jennifer discovers a hidden world of millions confined to their homes and bedrooms by ME, commonly known as chronic fatigue syndrome. Together, Jen and her new husband, Omar, must find a way to build a life and fight for a cure."

MECFS is a devastating illness that has not received the attention it needs from the medical community, for all sorts of f***ed-up reasons. Many of the people with this disease can't be their own activists – they are too sick. So please, watch the trailer, watch the movie (check your favorite streaming services if you don't have access to PBS), and pass the word on. Maybe if we make enough noise, something will change in the medical community.

Next, do you know the animal photography of Tim Flach? He's got a beautiful portraiture style and I particularly love his presentation of endangered animals. Definitely worth a click today.

In a similar vein, check out the winners of the Wildlife Photographer of the Year contest at London's Natural History Museum.

So. Writing Jane, Unlimited presented a lot of unique challenges. I've already written about Webs Versus Lines. Today I want to talk about an aspect of the book that changed over time: its choose-your-own-adventure structure.

Well, in most of the early drafts of Jane, at the point where the book splits off into five different stories, it was up to the reader to decide which story to read next.Why? Because I envisioned the book as a choose your own adventure, an interactive kind of book in which the reader is offered choices and gets to decide what happens next. My expectation/hope was that the reader would read all five stories, but in whatever order appealed to them.

(Choose your own adventures are also often written in the second person point of view, the conceit being that you, the reader, insert yourself into the story, pretending to be the main character. Accordingly, the first many drafts of Jane were indeed written in the second person point of view…which was incredibly challenging and complicated and created all sorts of problems. But I'm going to have to blog about that some other day, when I have more brain space!)

From the get-go, the reader's choice aspect created major challenges. Why? Well, let me explain a little bit about the writer's job of Planting Clues.

This is a book in which clues matter. There are a LOT of things going on, and a lot of things link to a lot of other things. For example, you might pick up a clue in the mystery story that doesn't come to fruition until the horror story or the sci-fi story. You might leave the spy story not understanding a part of that story… until you get to an explanatory scene in the fantasy story. It's my job as the writer to fill the book with hints and clues that will form a sort of web for the reader, a web that they're gradually able to start filling in for themselves, with those "Aha!" moments, those "Ooo, I bet I know what's going on!" moments, and those "Holy crap, I didn't see that coming!" moments, that make reading a book so fun. If you're having that experience while you're reading a book, it's because a careful writer has orchestrated that experience for you from behind the curtain.

And you know what matters to the reader's experience of Clue Absorption?

If you get to decide which of my five stories you read first, then I have no idea how long it's been since you last got a clue about the man in the strawberry beanie. Or the woman in the patent leather shoes, or the non-binary person eating a banana split. If I don't know in what order you're reading my stories, I don't know where to plant my clues and follow-up clues. I don't know if at any point, you're receiving too many clues or too few. And here's the thing: if the reader is reading a book, and the clues are piled on top of each other too closely, then the reader feels like the author thinks they're stupid. If the reader is reading a book, and the clues are too few and far between for the reader to understand or remember... then the reader feels stupid.

The reader isn't stupid! The reader is a genius, and a necessary organism in the symbiotic relationship between people and books that gives books meaning. If a book is ever making you feel stupid – or making you feel like the author thinks you're stupid – the author probably screwed up. Alternately, it's just not the book for you; no book works for everybody. The latter explanation is okay. The former one, when it happens, is a shame.

So anyway... around the time I realized second person POV was not serving my story, I also realized that my job would stop being completely impossible if I took back control of the order in which people read the parts of my book. This also meant that I stopped getting early readers who came back to me with the terrible news that they'd read the horror story first, or, even worse, last. I'm so sorry. That must have been horror-ible.

It also allowed me to nudge my themes in certain ways, and know how my reader was experiencing them. It allowed me to control the pacing of important revelations. It allowed me to guide the reader  from serious to absurd and back again; it allowed me to plant the moments of greatest emotional impact where I thought they fit best. It was such a relief to have control over these things again!

My brilliant editor, by the way, knew from the beginning that I was going to be better off once I let go of the choose your own adventure conventions. It took me many drafts to understand it for myself. Kathy, thank you for your incredible patience.

And so. This is why Jane, Unlimited is a book in which Jane gets to choose her own adventure.... but the reader does not. :o)

Godspeed to all writers.