May 12, 2017
We started up a fairly steep, winding dirt path, wanting to see if it led to a beautiful and isolated spot where we might make camp for the night.

After a while, we realized that given the steepness of the terrain, we should really go back down to the car and get our gear. Why do this climb twice?

Shortly thereafter, with packs on our backs, we started up the path again. Our packs contained food, a tent, two sleeping bags, two Thermarests (camping mattresses), a lot of water, and warm layers, and let’s be honest, Kevin was carrying most of it. I can carry a decent pack, but I don’t have a lot of experience carrying a heavy pack up steep terrain.

We had a map to our hoped-for destination, but it quickly became clear that the map showed a pretty straight representation of a path that was actually composed of steep switchbacks. Occasionally, a section of the path was covered with clumpy snow. Ah yes, we thought. We’ll be encountering occasional snow.

We reached an unexpected stream that looked as if it was going to be a tricky to cross without getting wet, one of those streams where you’re fine if you’re able to balance on the exposed rocks, but a misstep will result in soaked feet on a cold day. “How do you feel about this?” Kevin asked me, always a gentleman. “I feel that worst-case scenario, my feet will get wet,” I said, so we did the balance-on-the-rocks thing, and neither of us got wet, and it was very satisfying, and we continued on.

I can’t remember which came next: the second, more difficult unexpected stream, or the realization that we were in for more snow. A lot more snow.


Eventually the path was all snow, deep snow, maybe three feet deep, crusty on top but soft underneath. We started doing some post-holing. (Post-holing is when you step on what you think is hard snow, then one leg plunges in, and you’re briefly stuck there, and it’s hard to step out without post-holing the other foot.) At this point, we’d gone so far and exerted ourselves so much that we were determined to continue on. It was really hard work, and I was really looking forward to it ending, but I was also glad to be there, and curious about what was going to happen next.

What happened next were two more unexpected streams, the crossing of which essentially defeated us, so that from that point on, our feet and socks were soaked. We kept climbing through snow. And climbing. And post-holing. And carrying all the stuff; Kevin in particular was post-holing it, up a steep climb, with dozens of pounds of stuff on his back. At some point, I realized that there was a way I could help out the team. Because I’m a lot lighter than Kevin, especially when he’s carrying a heavy pack, I was post-holing a LOT less than he was. But my steps would pack the snow down a little bit. Then, often, Kevin could step into my packed-down footsteps without post-holing.

I began to lead, with the purpose of making a packed-down path for him, so that he didn’t have to post-hole the whole way. It felt good to be helpful. It also felt good to find an advantage, during strenuous athletic activity, to being small.

Are you remembering that you’re supposed to be guessing where we are? Here’s a clue: As we climbed through this snowy landscape, a few groggy mosquitoes buzzed around us.

Finally, after about three hours, we reached the lake that had been our goal all along. At first I didn’t even notice we’d reached the lake, because despite all the snow, I’d still been expecting water. You know, wet, sparkling water. Not a lake of ice and snow! Kevin had to say to me, “That’s the lake.” I think I managed an exhausted, “Oh.”


This high, exposed area gets a lot of sun. The snow was softer, and I began postholing a lot. I got stuck and needed extrication help at one point! As we chose our place to camp, with soaked feet and mounds of soft snow in every direction, we were pretty freaking weary. We pitched the tent on snow, which is something I’ve never done before.

We had a home now, with a pretty dramatic view.

It was as beautiful and as isolated as we could have hoped for. It was time to stop struggling. We were both dying to take off our wet shoes and socks… but first, dinner.

It was probably around 8 or 9 PM when we climbed into the tent. The floor of the tent was icy-cold, but the Thermarests did wonders to combat that feeling. We wrung out our socks and other wet things and hung them from the ceiling. 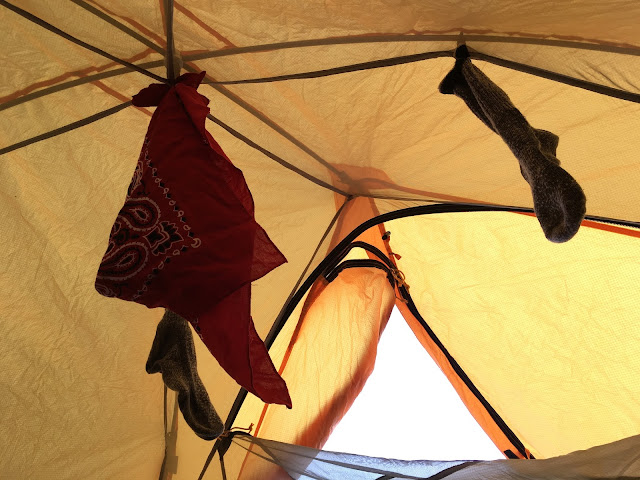 See how happy we look? It’s because our feet are dry. 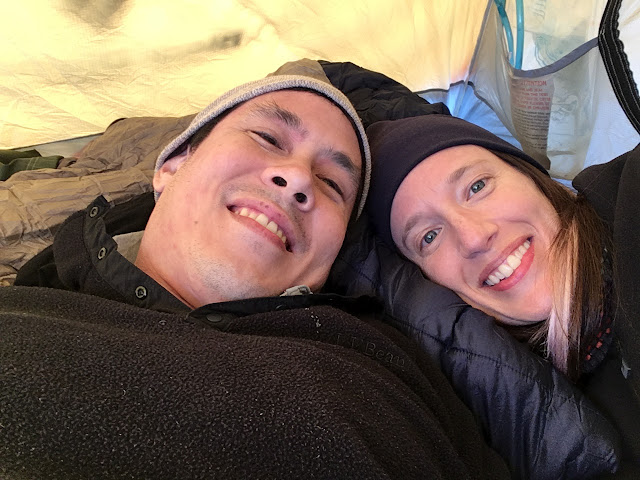 We organized our stuff, put on our layers, and got into our toasty sleeping bags. Naïvely, we imagine that we’d watch the sunset, but at 10 o’clock, here’s how it looked outside. 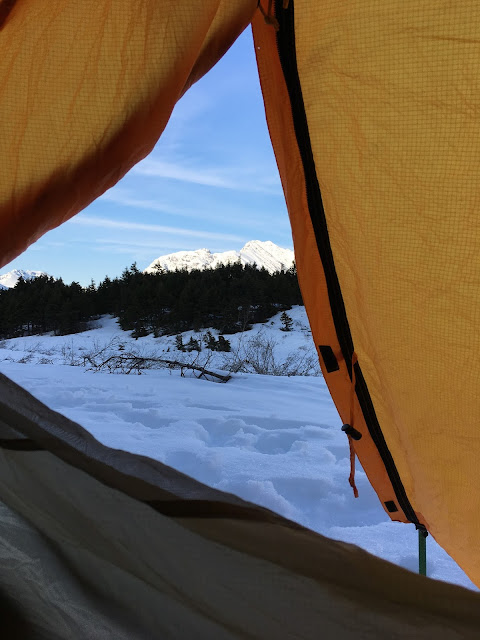 We keep forgetting about this while we’re here. The sun sets around 10:30 or 11 and it never really gets dark. That’s another clue. It’s constantly surprising us.

We think the temperatures probably dropped below freezing that night, but we were warm in our home on the snow. We woke up around five-something and this was the sunrise view through our front door. 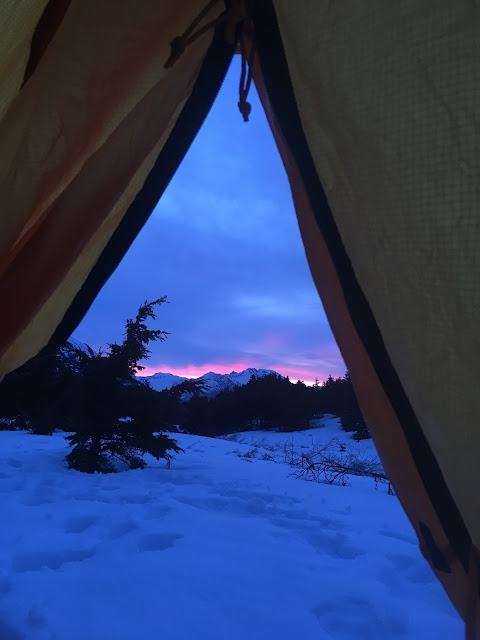 Knowing that all that soft snow would’ve gotten nice and crispy during the night, we broke camp, packed, got ourselves together, and started the hike back pretty early. The way down was SO much easier! It was downhill; our boots and socks were already soaked, so the streams felt less risky; but most of all, the snow was solid enough that there was hardly any postholing. Also, we’d done a really unique, difficult, special thing. That felt great :).

It took us less than an hour to get back to the car. And then we drove on to the next adventure… which I will blog about tomorrow.

I hope you enjoyed this story of our camping trip at Carter Lake, in the bright, snowy light of May, on the beautiful Kenai Peninsula of Alaska. :) 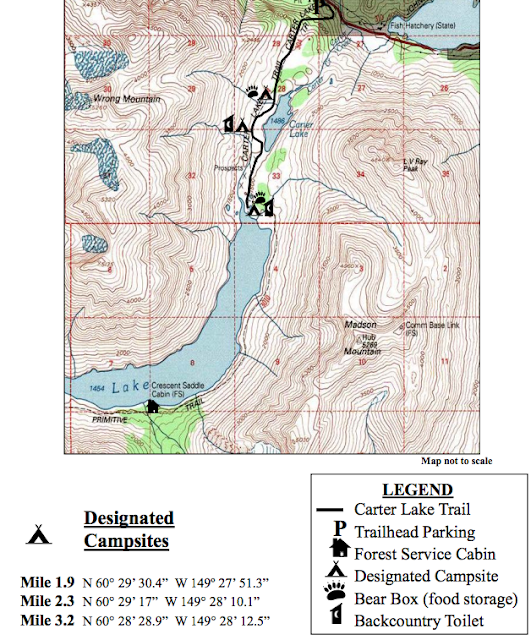 camping Guess where I am hiking travel