Three Links About How to Contribute to the Resistance 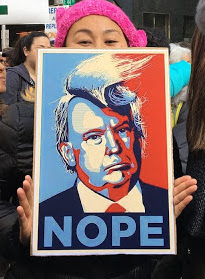 1. Indivisible: A Practical Guide for Resisting the Trump Agenda. Written by former progressive congressional staffers, this is intended as a practical guide to influencing the legislature. It's well-written and easy to absorb, it contains insights that only people in the business would be able to provide, and it has some practical ideas for things we peons can do. It's also inspiring.

2. How to #StayOutraged Without Losing Your Mind: Self-Care Lessons for the Resistance, by Mirah Curzer. This article has some great tips for staying engaged in activism without burning out. (Please note that it does assume some things about its audience – for example, that we would all benefit from therapy and can afford it; that we all live someplace where it's safe and pleasant to go for mind-clearing walks; that we have the privilege of part-time activism.)

In case you'd like more information about the Indivisibility guide before clicking over, I'll close by excerpting their intro:

"The authors of this guide are former congressional staffers who witnessed the rise of the Tea Party. We saw these activists take on a popular president with a mandate for change and a supermajority in Congress. We saw them organize locally and convince their own MoCs to reject President Obama’s agenda. Their ideas were wrong, cruel, and tinged with racism— and they won.

"We believe that protecting our values, our neighbors, and ourselves will require mounting a similar resistance to the Trump agenda — but a resistance built on the values of inclusion, tolerance, and fairness. Trump is not popular. He does not have a mandate. He does not have large congressional majorities. If a small minority in the Tea Party could stop President Obama, then we the majority can stop a petty tyrant named Trump.

"To this end, the following chapters offer a step-by-step guide for individuals, groups, and organizations looking to replicate the Tea Party’s success in getting Congress to listen to a small, vocal, dedicated group of constituents. The guide is intended to be equally useful for stiffening Democratic spines and weakening pro-Trump Republican resolve.

"We believe that the next four years depend on Americans across the country standing indivisible against the Trump agenda. We believe that buying into false promises or accepting partial concessions will only further empower Trump to victimize us and our neighbors. We hope that this guide will provide those who share that belief with useful tools to make Congress listen."