In Which We Try Falconry

December 11, 2016
This post is about hunting, using trained birds of prey. If you'd rather not read it, I understand... maybe go look at baby goats in pajamas instead :).

So. Kevin and I are doing one new thing every month that neither of us has ever done before.

In April, we went to a wolf sanctuary. In May, we went indoor skydiving. In June, we floated in floating tanks. In July, we got a golf lesson from my dad. In August, we went deep see fishing. And in September, we did Boda Borg. 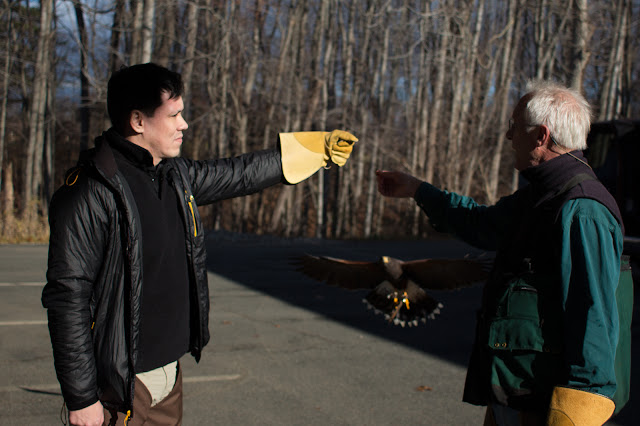 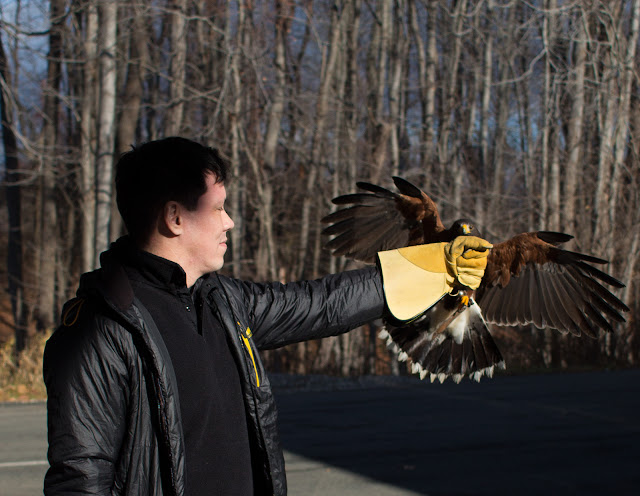 And spent some time with some Harris's hawks. 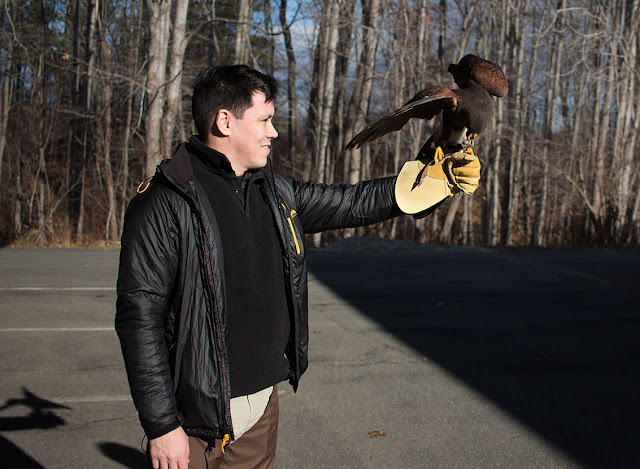 As usual, Kevin took better pictures than I did. 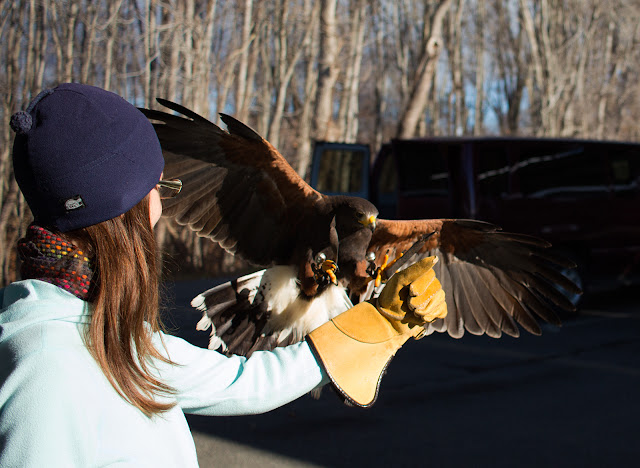 I was just so freaking excited. I couldn't focus on photography. Or anything, really, including many of the interesting thing Chris was saying, because I had a hawk on my hand. 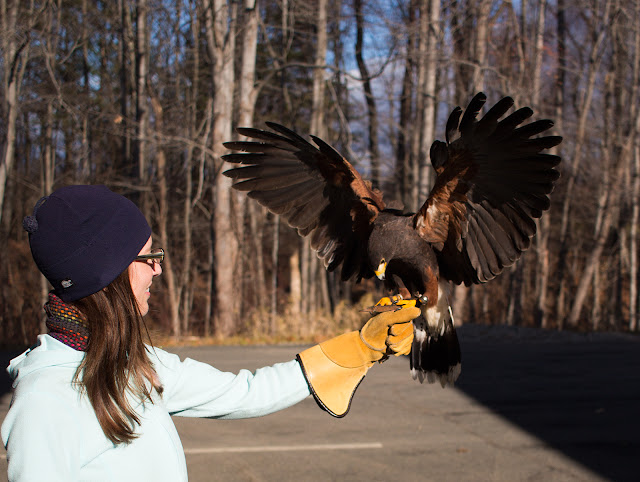 This guy was so light, and silent, and graceful.

Chris taught us all about Harris's hawks, which are native to Mexico and Central and South America. They're social birds that hunt cooperatively in groups. He taught us about falconry too, about the process of training raptors to hunt and return to his hand. And then we joined Chris and two female Harris's hawks for a hunt.

This was the first time I've ever done any sort of hunting. I'm a meat-eater, I grew up in the country, and my mother grew up on a farm, so I've been surrounded by hunters and hunting all my life, but never participated in the hunting. I've always felt a level of discomfort and even distress around the topic, probably because of the hunting subculture in which people do it for sport rather than for food. I also think we live in a society that is extremely judgmental about what people should and shouldn't eat (perhaps especially women), and a society in which a lot of our food, especially our meat, is produced in distressing and inhumane ways. Food is a really, really complicated topic for most Americans (whether they're conscious of it or not!), and for a lot of us, hunting is too. So I was having a lot of thoughts and feelings as we directed the hawks to hunt for rabbits and squirrels, which we (and the hawks) later ate (and enjoyed!). A wild red-tailed hawk actually joined our hunt for a while too, which added a whole new level of things to think about.

I have a thoughtful post about it somewhere inside me. But I'm afraid that my thoughtful writing energy is going to the new book I'm writing these days, so I'm just not going to get into it today. Instead, I'm going to share a few more pictures of these beautiful birds in action, and ask you to forgive me for how uninformative and un-introspective this post is. The new book I'm currently drafting is, in part, about relationships between animals and humans, so I'm guessing that a lot of my thoughts and feelings will end up manifesting there. 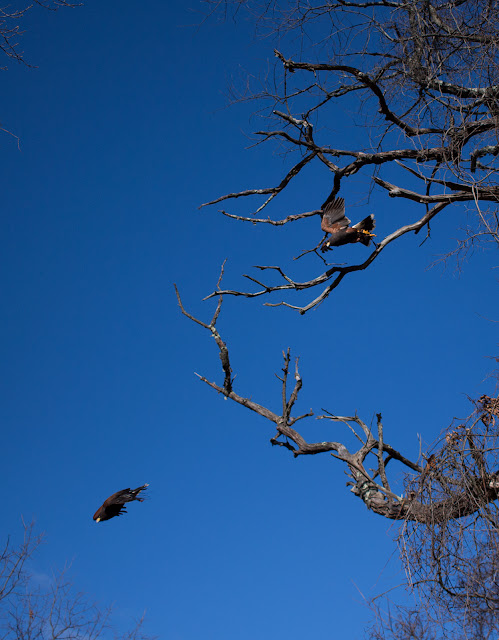 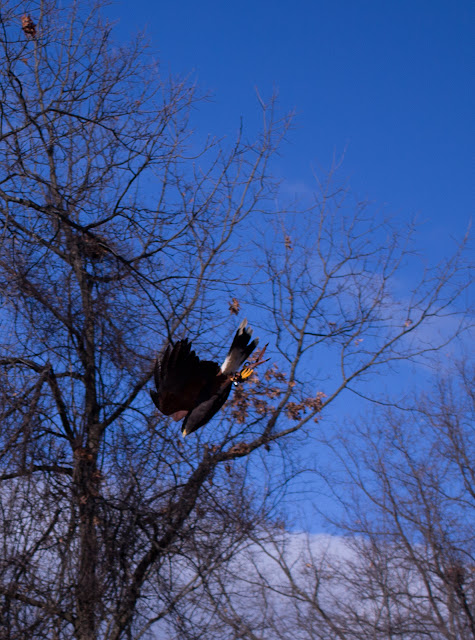 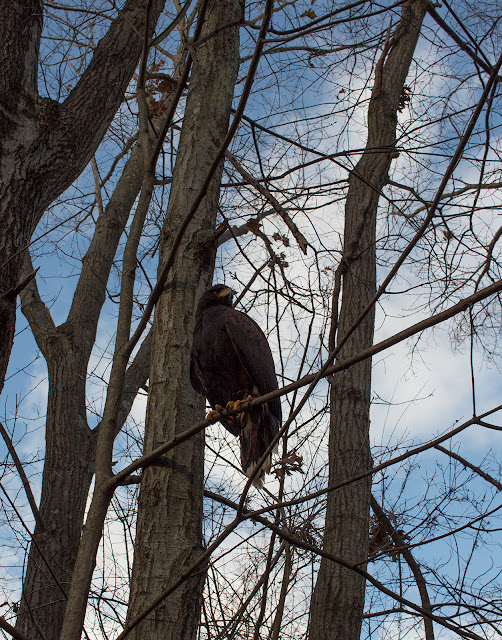 Many many thanks to Chris Davis for an experience unlike any I've ever had. It was without a doubt our most interesting New Thing so far.
falconry Harris's hawks new things raptors