"There are shortcuts to happiness...

Here's a writing tip: dance. If you're writing and you get stuck, or you're tired but don't want to stop quite yet, or your head is spinning, or it's just time for a break -- if you're able, and in whatever way you're able, dance. I do this almost every day (just ask the guy next door whose windows look into my kitchen) and it clears my head right out. Sometimes, the problems I'm having in whatever scene I'm writing solve themselves. Just try it once! And if you need some inspiration:

I will now recommend a Bollywood movie that does not star Shah Rukh Khan. (*gasp*) 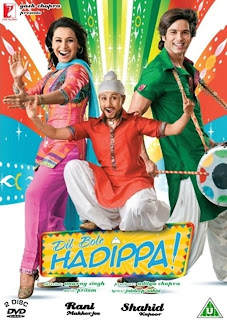 In Dil Bole Hadippa! ("The Heart Says Hurrah!"), Veera, played by Rani Mukherjee, is the best cricket batsman in the Punjab. Unfortunately, when it comes time for tryouts for the Indian team, she is not allowed even to try out for the team. Can you guess why? Yeah, that's why. Can you guess what she does? Well, naturally, she disguises herself as a man! Unfortunately, the captain of the team is just so damn cute. And has *feelings*. Shenanigans ensue!

This movie is fun and charming and SO SO FUNNY, and the reason it's funny is that Rani Mukherjee is an outstanding comedic actor. I knew she was good -- I've seen her in *tons* of movies, thanks to the fact that she's often SRK's costar, *ahem* -- but I had no idea how bright she could shine when she's not in SRK's shadow and is allowed to play the movie's main role. I just love her. And in addition to the humor, this movie has a few scenes that made my heart glow. For example, Veera comes to tryouts as herself, clearly a woman, and is turned away at the gate by a guard who tells her something to the effect of, "This is cricket, not a beauty pageant." Veera is crushed. Then, a religious procession goes by, carrying the effigy of a goddess (my apologies for not recognizing her -- though I was proud to recognize some of the Sikh references in this movie!), and the guard and all the men standing in line for tryouts make signs of reverence and respect to the goddess. Veera then says something to the guard that I think many women, brought up under any of most world religions, could relate to: "She, who you turn into an idol and worship -- when she is human, you crush her. Shame."

It turns out that Veera's spirit is very hard to crush. :o)

Here's a trailer that does a decent job of conveying the feeling of this movie (and also demonstrates a tendency of bilingual Hindi-English speakers that I've mentioned here before, namely, the switching back and forth between Hindi and English so fast that if you only speak one of those languages, you get a headache).


Also, IMO, this is a good choice for someone who's never seen a Bollywood movie before and wants an introduction. There are some Bollywood movies that would make a terrible first introduction to the industry and would cause you never to watch another Bollywood movie again. I could make a list. I won't, but I could. BUT! This movie! It's funny, it's colorful, it's a good story with likable characters and good acting (and some exceptional dancing), it's only two hours and 28 minutes long (short for Bollywood), and I think it's representational. As you watch more and more Bollywood, you discover that there are plenty of quality movies that aren't light and fun -- Shakti: The Power, for example, is one of the most upsetting movies I've ever liked (and would NOT be on the list of movies *not* to watch that I'm not making) (and WOW can Karisma Kapoor act) -- but to pull you in and get you curious about the industry, I recommend something a little lighter for starters, like Dil Bole Hadippa!.

And did I mention the cuteness and the dancing? The two leads of this movie (Rani Mukherjee and Shahid Kapoor) are rawther beautiful people; they're excellent dancers; and Hindi movie credits are way more entertaining than other industry's credits. Evidence for these three points can be found in the video of the movie credits below, which I'm embedding just for fun. The credits don't have much to do with what happens in the movie itself (especially wardrobe-wise, and ALSO, in case you're getting the wrong impression, most of the screentime of a Bollywood movie is not actually singing and dancing), so don't watch them hoping to get a sense of the movie actual -- they're just fun, and occasionally hilarious (I strike poses in the locker room shower while clothed, don't you?). They will also teach you how to pronounce "hadippa." Mostly, though, I'm embedding them to get you dancing.