I Dreamed a Dream

Some news deserves mention on the blog: in Germany, Fire, or Die Flammende, debuted on the Spiegel adult hardcover bestseller list. Shazam! Thanks so much to my German readers. I cannot wait to visit you in March.

Also, FYI to American and Canadian readers: Fire is just coming out in paperback (the release date is January 25). Shazam!

(I've been trying to incorporate the word "Shazam!" into my vocabulary more often. Am I overdoing it?)

I'm going through a stretch in which my dreams are directly related to exactly what I just did. The other day, I took a trapeze class, listened to the soundtrack of Les Miserables for the FIRST TIME EVER (how had I gone my whole life without doing this?), and had a dream that night that Derek Jeter (the shortstop for the New York Yankees) and I were setting off to rescue Jean Valjean (the hero of Les Miserables) together. I'm not sure what we were rescuing him from or if we succeeded; the dream seemed to be about the journey. Derek Jeter was running along on solid ground. I was beside him, flying through the air on a flying trapeze. I'm unclear about whether they were successive flying trapezes and I was swinging from one to the next or whether it was a single flying trapeze that was somehow traveling alongside him, keeping pace. Thank goodness, I was doing splits on the trapeze, not pullovers. Otherwise, it would've been an exhausting journey, and by the time we got to Jean Valjean, I would've had nothing left to rescue him with.

Because I've posted certain things recently on my blog, I feel it is my duty to make an announcement. Remember that at trapeze class, I've been trying to catch my pullover? (First attempt and second attempt.) Well, in my most recent class, there was a little less of this nonsense... 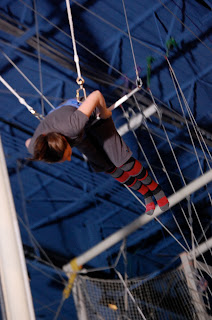 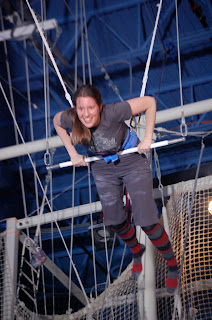 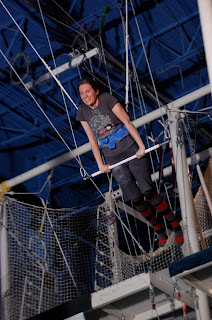 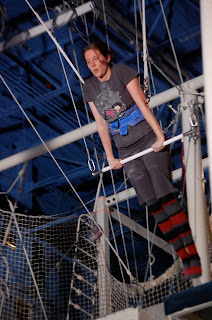 A precious little more. (Click on any picture to enormify.)

Can I point out how pointed my toes AREN'T in the picture below? It almost looks like I was trying to be ironic. Sadly, I was not. 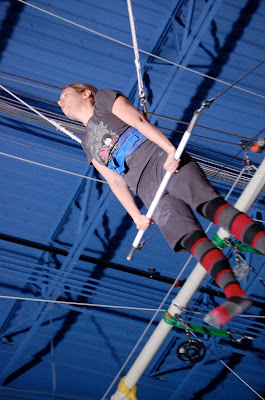 To catch this trick, you do a mid-air push-up, release the bar, and propel yourself over the bar into the hands of your catcher. 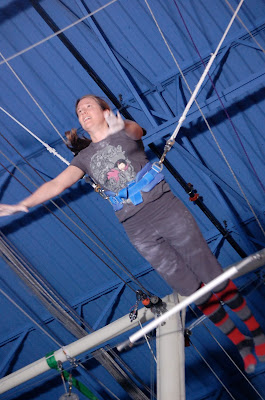 Everything is under control. 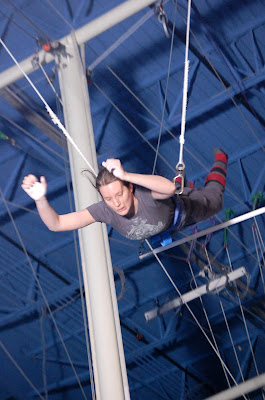 Alternately, you do a pathetic little motion with your arms that might be mistaken, in ignorant circles, as a mid-air push-up, then let the guy on lines muscle you up into the hands of your catcher. This is not recommended. Regrettably, sometimes, it's all you're capable of. :o) (Explanation: the person "on lines" is the person holding your halter lines and breaking any falls so that you don't break your neck. The halter lines are connected to your belt. When you're first learning a trick and/or if you don't have the strength yet to lift yourself into all the necessary positions, the person on lines often uses his/her strength to pull the lines and help lift you.)

So. Remember my New Year's resolution to catch my pullover? 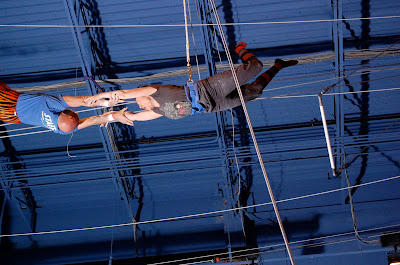 Now, to give credit where credit is due, I don't think it's exaggerating to say that the person on lines at this time (Kaz) was providing most of the muscle. It was the end of a hard class and I was EXHAUSTED. Also, the catcher (John F) is a superstar for seeing this wild, floppy thing flying toward him and managing to catch it anyway. After he caught me, I was so COMPLETELY SHOCKED at having made the catch that I forgot everything I was supposed to do next and probably made his job rather difficult. ALSO, a thank you to the person on the board as I was taking off (Wendy), who said something to me that at the time I thought was nuts: "Sometimes, when it's your first time trying to catch something, that's all your body needs to know -- that it's catch time -- in order to figure out what to do." I was skeptical, but as it happens, this catch was the first time I ever managed to get into position in time for this trick. THANK YOU, Wendy, Kaz, and John at TSNY Beantown! Amy, thanks for the excellent company, and Molly, a big thank you for the pictures!

Now I have a new goal: to do the pullover way better; more on my own steam; and in a manner such that it's not the ugliest thing anyone has ever witnessed. Yes, I dream a dream. :o)
bestsellers dreams flying trapeze release dates