Showing posts from November, 2009
Show all

Joyce [pleasantly]: Have we met?
Spike: Um, you hit me with an axe one time.
[Joyce looks confused]
Spike: Remember? [helpfully brandishes imaginary axe] "Get the hell away from my daughter! Rawr!!!"

So, now and then I like to ask my readers to take a minute to introduce themselves. I expect I have a lot of regular readers who don't comment; I'm sure I have readers who're just passing through for the day; doubtless I have readers who got here by accident, having misspelled "Kristin Chenowith," and wish they'd never ended up here at all. :o)

Anyway, no pressure. But today I extend an invitation to all of you -- even the lurkers and the shy -- to tell me a little bit about yourself in a comment. You don't have to tell me your real name. But maybe you'd like to tell me where you are? What you do? What you feel like eating tod…
236 comments
Read more

A FAQ; A Holiday Question; Stuff; In Addition to Which: Things

The extremely silly gentleman to the right (click to make him bigger. Really. You want to see him bigger) is my friend and fellow writer Will Ludwigsen, who was flabbergasted to find Graceling in the dumps at his local Barnes & Noble. Check out his strange, sad, and lovely story "Remembrance is Something Like a House" in Interfictions 2: An Anthology of Interstitial Writing, just released by Small Beer Press. My sister, secret codename: Cordelia, and I had the pleasure of listening to Will read this story around the campfire a couple Halloweens ago. Cordelia was dressed up as Randolph the Orange-Nosed Reindeer and I was dressed up as a Leprechaun for Change. (This was right before the 2008 election. Beyond that, don't ask. ^_^)

So, I promised that I'd let you know if I stumbled across any gems in my reading. I have. The Magician's Elephant, by Kate DiCamillo, is a book about magic, love, and longing, and it is fabulous.

Can you tell me when your b…
56 comments
Read more 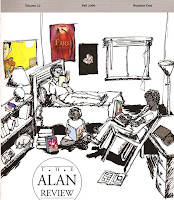 8. Warm hellos to everyone coming to my blog from NaNoWriMo. Welcome! The comments you've written here and there in various posts have brought tears to my eyes. Thank you! I really do know what it's like, and I really do hope you'll keep writing despite how hard it is, and despite all the voices that tell you not to. (To any of my regular readers who have no idea what I'm talking about, I wrote a pep talk for National Novel Writing Month, which you can read here.) To all those writing novels/short stories/fan fic/WHATEVER this November: good luck. Don't forget to be kind to yourself and KEEP THE FAITH.

7. For those of my blog readers who are Megan Whalen Turner fans -- and I know there are a lot of you -- check out her interview last week at Hip Writer Mama.

6. Next, remember the other day when I mentioned Tu Publishing, a small, independent multicultural SFF press that needs funding to get off the ground? Well, now there's a new, fun way to help: the Kicks…
44 comments
Read more

(from Simon & Garfunkel's "Leaves That Are Green")

Goodbye to my darling Super Conquerant 80-sheet hardback spiral notebook made in Spain by Enri. For years, we've had something special, you and I... but now my trusty neighborhood stationer, Bob Slate, tells me that you've been discontinued, probably by the importer. Alas! No more will I fold you over my knee and cover you with a thousand sweet scribbles. No more will you travel with me everywhere I go, simply because I cannot bear to let you out of my sight. No more... *sniff*... will I tuck you in to sleep at night in the fireproof, waterproof safe! Oh, my darling! *weeps; rends clothing*

So, I'm not so precious about my writing process that I'm going to try to figure out how to get my exact brand of notebook from Europe. Actually, I'm slightly that precious, but it'd be a lot healthier to just accept that the notebook is no longer available, don't you think? So this means …
34 comments
Read more

"It was my candle to St. Jude"

Announcement: I ♥ librarians. Why? Because librarians love information, know how to find it, know how to use it, and know how to help other people find and use it; and because librarians love, care for, and offer us BOOKS. And school librarians, in particular, share their awesomeness with young people without condescension. Thanks so much to the New Jersey Association of School Librarians for inviting me to their fall conference this past weekend. You guys are inspiring.

Housekeeping: I got a great suggestion the other day from an audiobooker who wished she could see the maps of the kingdoms while listening. Please see my new link to the left, Maps of My Book World, which shows both the maps so far, both drawn by Jeffery C. Mathison. Click on the maps to make them bigger.

In other news, in case anyone's wondering, Spike is still beating Beethoven in the highly scientific Spike Versus Beethoven: You Decide! poll -- but Beethoven is holding his own! I'm proud. I thought o…
34 comments
Read more

Randutiae, and Give Yourself a Treat Today

If you happened to see me at Books of Wonder on Tuesday covering my ears, singing "la la la la la la!", and seriously invading Scott Westerfeld's space, I swear, it was only because I was trying to avoid hearing the Liar spoilers happening on my other side! Justine Larbalestier was being an absolute champ trying to protect me from her conversations with her readers, but really, there's only so much an author can do! :o) Anyway, I got through unspoilered, and clearly, I need to read Liar ASAP. Oh, and the event was super. Thanks to everyone who came!

I'm having a busy week of train-riding and events -- I'm home again now, but tomorrow I'm off to New Jersey. Cross your fingers for me tomorrow evening, when I'll be giving a speech at the fall conference of the New Jersey Association o…
20 comments
Read more

My assignment was to memorize the names of the stars."

"Yes. If he calls for one of them, someone has to know which one he means. Anyhow, they like it; there aren't many who know them all by name, and if your name isn't known, then it's a very lonely feeling."

-A conversation between Meg and Proginoskes in A Wind in the Door, by Madeleine L'Engle

I wonder if my characters feel lonely until I've named them? How patient the characters must be whose names I keep changing! Sometimes I forget how much they depend on me, for everything.

Proginoskes and Meg are both Namers. Here's something else Proginoskes says: "When I was memorizing the names of the stars, part of the purpose was to help them each to be more particularly the particular star each one was supposed to be. That's basically a Namer's job."

Here's a FAQ about Fire. (In case you're completely spoiler-phobic: since I'm t…
38 comments
Read more

Reminder: I love Finland. (And SYTYCD, too!) 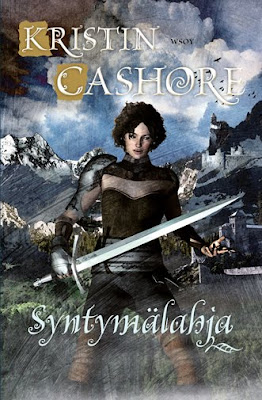 It's been a while since I've shown you a brand new cover for Graceling. Behold!


This is the Finnish cover. What do you think? I love it to pieces, and nothing you say will stop me from loving it to pieces, so do your worst. In particular, I love finally seeing a short-haired Katsa, and -- the mountains and castles in the background -- *flops* -- ! Maria Lyytinen, who is the translator, tells me that the back cover shows a scene of mountains at sunset/sunrise. She also explained that the word "Syntymälahja" encapsulates the idea of a gift received at birth.

Reminder: I love Finland. Dear sister, secret codename: Apocalyptica the Flimflammer: I cannot wait to give you a copy of Syntymälahja!

In other news... who saw this week's So You Think You Can Dance? How about that Bollywood number? I almost cried at the end when Mollee gives Nathan back his sword. My favorite was the Stacey Tookey "fear" dance with Kathryn and Legacy. I also enjoyed the Wade R…
22 comments
Read more

Tu Publishing; Stuff and Things; and, Our Books Are Watching Us Jealously

Via Deborah: Stacy Whitman, freelance editor and Simmons Center for the Study of Children's Literature grad, is trying to start a new publishing company. Tu Publishing will be "a small, independent multicultural SFF press for children and YA." A small press devoted to multicultural fantasy/SF -- good idea! But -- it will only get off the ground if it gets enough funding. Care to help? There are benefits to pledging, and you'll only pay your pledge amount if the project actually launches. Go here for more info. You can give as little as $5, and you can do it using your Amazon account, if you have one. If Tu Publishing can raise $10,000 by December 14th, they'll start accepting manuscripts in January.

******
I know that some of you will have fun trying to recognizing books without their dust jackets on the blog of Sarah Miller, author of the marvelous Miss Spitfire. (Who knew so many books had such cool undercover decorations?)