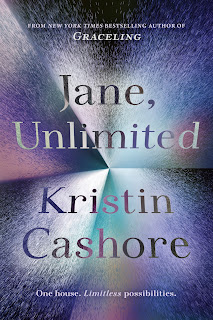 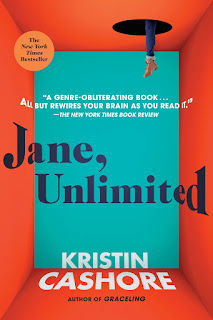 Jane, Unlimited is my fourth release, a kaleidoscopic novel about grief, adventure, storytelling, and finding yourself in a world of seemingly infinite choices. It's also about umbrellas and umbrella-making :o). It comes out on September 19, 2017. I hope to have more stuff up about it soon, including reviews and foreign release info! For now --

Jane has lived an ordinary life, raised by her aunt Magnolia—an adjunct professor and deep sea photographer. Jane counted on Magnolia to make the world feel expansive and to turn life into an adventure. But Aunt Magnolia was lost a few months ago in Antarctica on one of her expeditions. Now, with no direction, a year out of high school, and obsessed with making umbrellas that look like her own dreams (but mostly just mourning her aunt), she is easily swept away by Kiran Thrash—a glamorous, capricious acquaintance who shows up and asks Jane to accompany her to a gala at her family's island mansion called Tu Reviens.

Jane remembers her aunt telling her: "If anyone ever invites to you to Tu Reviens, promise me that you'll go." With nothing but a trunkful of umbrella parts to her name, Jane ventures out to the Thrash estate. Then her story takes a turn, or rather, five turns. What Jane doesn't know is that Tu Reviens will offer her choices that can ultimately determine the course of her untethered life. And at Tu Reviens, every choice comes with a reward, or a price.

Read Jane, Unlimited and remember why The New York Times has raved, "Some authors can tell a good story; some can write well. Cashore is one of the rare novelists who do both." 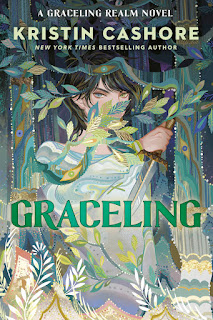 Graceling, my debut novel, is the story of Katsa, who has been able to kill people with her bare hands since she was eight. Katsa lives in the seven kingdoms, where very occasionally, a person is born with an extreme skill called a Grace. Gracelings are feared and exploited in the seven kingdoms, and none moreso than Katsa, who's expected to do the dirty work of torture and punishment for her uncle, King Randa. But then she meets a mysterious stranger named Po, who is also a Graced fighter and the first person ever to challenge her in a fight. The two form a bond, and each discovers truths they never imagined about themselves, each other, and a terrible danger that is spreading slowly through the seven kingdoms.


Graceling is published by Harcourt Children's Books in the U.S. and Canada, by Gollancz in the U.K., Australia, and New Zealand, and has been sold to thirty-three foreign markets so far. A New York Times bestseller, it's gotten a whole bunch of great reviews and even some awards; check out my Awards and Reviews page if you're interested in the gory details.

You can buy Graceling (and all my books) online at Amazon or Barnes & Noble. Even better, please support your local independent bookstore by going to Indie Bound, or order online at Powells! If you'd like a signed copy, please see the instructions on my Contacts, Info, and Credits page. 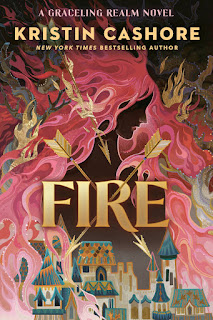 Fire, Graceling's stand-alone prequel-ish companion book, takes place across the mountains to the east of the seven kingdoms, in a rocky, war-torn land called the Dells.

Beautiful creatures called monsters live in the Dells. Monsters have the shape of normal animals: mountain lions, dragonflies, horses, fish. But the hair or scales or feathers of monsters are gorgeously colored-- fuchsia, turquoise, sparkly bronze, iridescent green-- and their minds have the power to control the minds of humans.

Seventeen-year-old Fire is the last remaining human-shaped monster in the Dells. Gorgeously monstrous in body and mind but with a human appreciation of right and wrong, she is hated and mistrusted by just about everyone, and this book is her story.

Wondering what makes it a companion book/prequel? Fire takes place 30-some years before Graceling and has one cross-over character with Graceling, a small boy with strange two-colored eyes who comes from no-one-knows-where, and who has a peculiar ability that Graceling readers will find familiar and disturbing...

Fire came out in October 2009 from Dial Books for Young Readers (in the U.S. and Canada) and Gollancz (in the U.K., Australia, and New Zealand), and its list of foreign publishers is growing. It premiered at #4 on the New York Times bestseller list. Check out the Awards and Reviews page if you'd like to see the awards and read the starred reviews! :o) 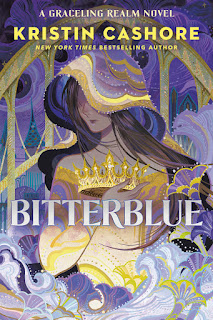 Bitterblue is a companion book to both Graceling and Fire and takes place in the seven kingdoms eight years after Graceling.  (Consider yourself warned: there are Graceling spoilers ahead!) Bitterblue, ten years old in Graceling, is now eighteen, and the queen of a kingdom still in recovery from the reign of its previous king, her father. The influence of Bitterblue's father -- a violent psychopath with mind-altering abilities -- lives on in Monsea, in ways Bitterblue hasn't yet learned the extent of. Feeling hemmed in by her over-protective and controlling staff, Queen Bitterblue begins sneaking outside the castle to walk the streets of her own city at night -- and meets two thieves who hold a key to the truth of her father reign.

For those wondering: Yes, Katsa, Po, and others from Graceling are among the cast of characters!

Bitterblue came out in May 2012 in the USA and various other markets and premiered at #2 on the New York Times bestseller list. In Sweden, she is a #1 bestseller! Go here for Awards and Reviews.
my books

February 28, 2008
There's a lot of information on this page, including instructions for purchasing signed copies and how to write to me. Check out the red descriptors at the beginning of each paragraph. I am once again signing and personalizing books via my local indie, Harvard Book Store! I no longer live around the corner from the store, so I expect to sign and personalize only about every couple months or so. Please order ahead if you anticipate wanting something. Here is the link: https://shop.harvard.com/kristin-cashore-signed-copies . Notice the instructions at the top: When checking out, indicate in the comments field that you would like a signed copy. Include the name of anyone to whom you'd like the book personalized as well. Depending on the state of my chronic hand problems, I'm happy to honor requests for brief messages such as wishing someone a happy birthday, good luck with their writing, etc., but please note that if you ask me to write something long or something I&#
Read more